Reddick and the fanbase scapegoat 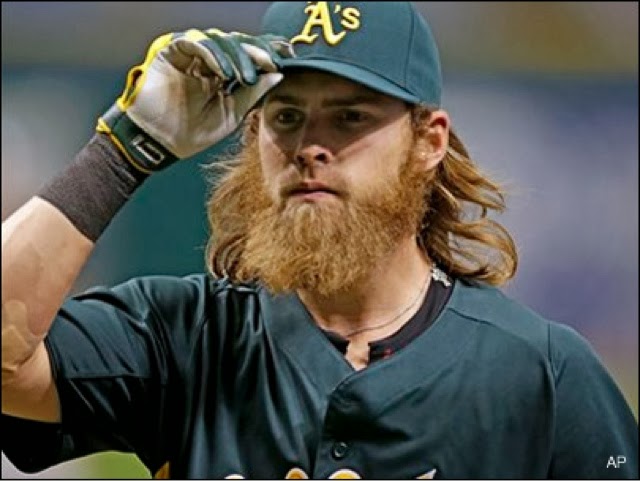 Evidently, the contemporary Oakland fanbase has taken a liking a pinpointing a scapegoat to dispose of their aggression and berate for their less than satisfactory performance as of recently. Over the past couple years, or beginning in 2011 to be exact, Daric Barton has been the quintessential punching bag for the A's to highlight their disdain after he was heralded as the "Next Albert Pujols" by a scout while still housed within St. Louis' system and failed to rise towards the lofty expectations set for him in 2011 after an exceptional campaign in 2010 in where he matched that same Pujols for the most cumulative walks drawn during that season en route to a .273/.393/.405 slash, 16.0% BB%, 18 DRS, and a 4.8 fWAR after 686 accumulated plate appearances. He would regress between an admittedly horrid 2011 stint and has since been shuttled continuously between Sacramento and the Bay Area to the ire of A's fans, who now associate every negative occurrence in Oakland with Daric Barton, and it has frankly become increasingly and unbearably annoying to wade through the countless social media comments pouting everytime his role on the ballclub is mentioned. Daric Barton isn't a superstar phenom as he once previously thought to be, however we all know that now. But he is a perfectly adequate replacement first baseman, something numerous fans would argue incessantly against, because evidently dingers are the only thing that matters.
It's more so representative of the developing analytical portion of baseball and those opposed to it, with the stalwart traditional fans requiring their 1B to hit dingers and are vehemently opposed to the surge of reverence towards plate discipline and defensive metrics. Plus, it didn't help that Barton was one of the better players in an era A's fans lump with mediocrity. So, even if Barton wins the World Series on a walkoff Game 7 double, the fanbase shall continue to criticize him for it not being a dinger (This would actually happen). He is unfortunately forever going to be singled out by the Athletics attendees as he enters his 10th consecutive year within the Oakland organization and likely shall be optioned forth to Sacramento for his 8th career campaign in a Rivercats uniform as he currently is out of options prior to the 2014 season and is slotted behind Brandon Moss and Nate Freiman.
Now however, as Barton's tenure is waining as an Athletic, the foundation has seemingly been constructed for Josh Reddick to usurp his status amongst those who frequent O.co Coliseum as Reddick has already roundly been labeled a pariah for a tweet criticizing the stadium attendance, not attending FanFest with most interpreting this as a jab at Oakland fans, and an abysmal 2013 to coincide with a lackluster conclusion to his 2012 debut campaign that now has him on the cusp of Bartonsville. However, he diffentiates vastly from Daric for his outstanding power capabilities, smashing an organizational leading 32 HRs with a .221 ISO in a remarkable first season within the A's possession that also was flanked by 19 DRS, a 4.8 fWAR and a 14.0% HR/FB ratio through 673 PAs to finish as Oakland's consensus most valuable asset in a franchise defining 2012 year. Despite that, a pedestrian September where he hit .164/.214/.295 and entered the postseason sputtering into what would ultimately be an ALDS defeat. Once more, approaching 2013 he was still considered to be one of the most essential components of a divisional championship defense and received optimistic reviews from the fanbase, but a wrist injury suffered in a collision in Houston wound up lingering throughout the entirety of 2013 as he refused to partake in a proper rehabilitation program and therefore set himself up for the Coliseum dwellers to jeer him throughout his struggles. After a .226/.307/.379 slash and but a mere 12 dingers in 441 PAs, Josh Donaldson rose to be the next perennial Athletics phenom and has since left Reddick in purgatory amongst A's pundits. But, is this vitriol towards Reddick justified, after having a considerable portion of the fanbase requesting he leave rather than have his arbitration hearing occur? The short answer is a resounding *no*, as Josh Reddick is easily one of the most crucial members upon the A's roster for numerous reasons aside from just a statistic as flimsy as batting average.
As opposed to Barton, who is still given a horrificly misguided reputation, Reddick isn't at replacement level or just slightly over that mark as Daric shall likely be for the remainder of his career, he's actuallu even far more valuable. Even despite a putrid and frustrating offensive campaign through 2013, he still managed to amass a 2.7 fWAR and a .153 ISO to feature as one of Oakland's most important contributors through a debilitating an improperly treated wrist issue. Additionally, his plate discipline actually improved with greater contact percentages, more consistent contact on balls in the strike zone, and a lowered SwStr% which likely bodes well for his upcoming 2014 regardless of being one of the most extreme pull hitters in baseball. Defensively, he accumulated 13 DRS and a 16.4 UZR to once again establish himself as one of the most elite defensive outfielders in baseball in what shall keep his importance to the Athletics relevant throughout his career regardless of possible offensive decline. The hatred rather seems to stem from some situational hitting and fan generated theories about Reddick's personality, stating that he despises A's fans over a tweet, not opting for FanFest due to this schism once more, and not accepting Oakland's initial arbitration offer of $2M that established narratives of greed and avarice for Reddick requesting an additional $1.25M. Plus the constant mention of his ".226" batting average as justification for a backlash upon the once celebrated right fielder.
Regardless of fan perceptions though, Josh Reddick *is* going to be one the most integral cogs for Oakland during 2014 and Daric Barton is not the worst player in Oakland A's history. You can choose to believe this or not, but it is true. So please, as fans, support the players who don your team's insignia and stop attempting to locate an organizational scapegoat
Posted by Chris Kusiolek at 9:29 PM