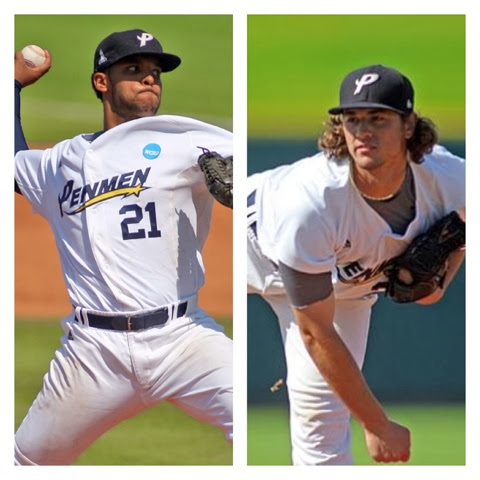 SHNU is more than just commercials, apparently
Oakland's 16th and 25th rounders took some time to chat with me about perfect game heartbreaks, hairstyles and all that other baseball stuff in a pair of interviews listed below. 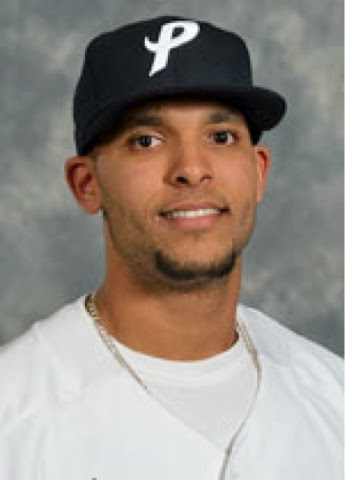 Junior Mendez is the first of the two. Mendez saw one of the largest stock increases from 2012 to 2013 of any draft hopeful, being plucked in the 16th round by Oakland. Between 39 1/3 IP and 19 appearances (1 start) while juggling time in Vermont and the AZL, Mendez went 32 H, 12 ER (2 HR), 15 BB and struck out 40. To compliment his success he also was one of the youngest collegiate juniors available in the 2013 Draft, just turning 21 this past September (9/20/1992). Justin Higley (12/25/1992) was the only more youthful college draftee (Not counting JC draftees) selected by the Athletics. He's in contention to break camp on Beloit's roster.
CK: Thanks for your time, Junior. How has your offseason been?
Mendez: Hey no problems. This offseason's been great. Had some time to spend with family and friends, but now it's time to really get into baseball mode. It's been the longest I've ever been taking off of the game. Guys would tell me how long the offseason was, but until now, I had no idea. I need to start getting my golf swing down so I can pick up a new hobby [Laughs].
CK: Obviously your last collegiate season was pretty special. Second nationally in strikeouts, 97 innings, a 133:17 K/BB ratio... Those are numbers that would make Max Scherzer blush. What was the key to your success?
Mendez: Yeah those numbers were pretty, but it wasn't until the season was over was when I really noticed how special that season was. The one thing that really kept me focused was thinking three pitches or less. Having that in mind allowed me to go deeper into games and kept me trying to do less and allow the hitters to get themselves out. It was a very simple philosophy that slowed the game down big time for me.
CK: Additionally, you struck out 15 in a no hitter that would've been a perfect game had it not been for a 7th inning error. Was it a little disappointing not picking up the PG?
Mendez: That was a funny day, not because I threw a no hitter but for the fact I had woken up with a fever and was not feeling good at all. I was praying that I could get through six innings and help my team to a win. I had no idea I even had a perfect game or no hitter going. I knew it was something when I had two strikes on the kid in the 9th and everyone was going wild. Was it disappointing? Not really because looking back at the play, it was a slow roller to third making it a tough play, and I know my third baseman did all he could to get the out and that's all that mattered.
CK: At least it wasn't as heartwreching as Massad's near perfect game huh? Haha (More on that coming up)
Mendez: Massad's near perfect game was ridiculous! Because unlike mine, his error would have been the last out of the game.

CK: Were you expecting to go around the 16th round? Or was it a surprise?
Mendez: Well when it came to the draft, I had no expectations. I knew that people would get told they go in the top ten and not go at all, some people get no interest at all until their names called, so really I had no expectations because it would only stress me out. I just said "everything happens for a reason" and just went on with my day. I knew that was something I couldn't control so I let the draft take its toll and was extremely happy to know I was going to a great organization who gives opportunities to those who perform and not so much politics.
CK: How was your transition to the professional ranks? Biggest difference between AZL and NYPL competition?
Mendez: My first few weeks were a little rough. I got away from my three pitches or less and was trying to do too much. but then I just figured out that hitters will get themselves out again and I began to have cleaner and quicker innings. The biggest difference from the AZL to New York- Penn league to me was the discipline on the hitters part. Hitters wouldn't chase as much and guys hit mistakes a little more often.

CK: What pitches do you have as of now? And which one in particular do you hope to improve upon heading onward?
Mendez: At the moment I have four seam, two seam, curve ball and change up. My change up has always been my least effective pitch until instructional league this year, when I got my slider taken away and put more focus on my change. The change going into this year is still my project, I know that with a real good change you can keep guys off of the fastball and make it look a little faster
CK: Digressing from baseball for a bit to hairstyles: Thinking about growing the hair out to Massad-esque proportions at any point during 2014? Would be pretty awesome, in my opinion.
Mendez: Well I always say that I won't grow my hair, but somewhere during the season I change my mind because nothing makes you look like ball player more than some curls out the back of the hat [Laughs]. And since I do most of the cutting hair on the team, I just dont feel like dealing with my own.

CK: Goals for 2014?
Mendez: My goals for this upcoming year, is do anything in my power to keep moving up. just want to become a better pitcher, so better command, better pitch selection, and improve my tempo and be a great teammate. 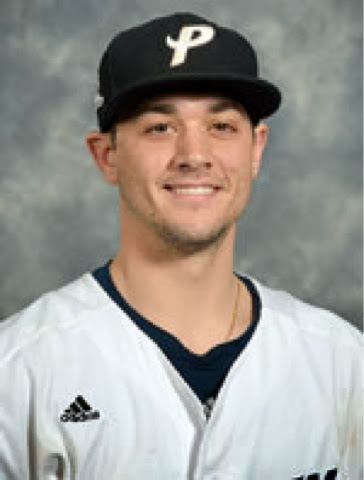 Second up is Jonathan Massad, Mendez' fellow Penmen rotation partner over the 2013 campaign. Massad went 30 IP (17 appearances/2 starts) entirely within the AZL while permitting 34 H, 13 ER (3 HR), 5 BB and punching out 24. Massad, who turns 23 on April 19th, was the 6th selection inbetween 13 consecutive senior signs (Rounds 21-33) in the A's 2013 Draft as a 25th rounder. He'll commence with the Lake Monsters come June barring a setback.
CK: Hey Jon, how was everything been since August?

Massad: Everything has been going well. I enjoyed the holidays with my family and friends and now just waiting to get back to facing hitters. I have just been working out and following my throwing program to stay in shape.

CK: Last season you starred for SHNU in a little over 80 IP and held opponents below the Mendoza line. How were you able to sustain your success?

Massad: My last season in college was great. We had a good defense which helped me a lot. I tend to get a good amount of ground balls so when the defense can work behind me it makes things a lot easier. I have only been pitching full time since my junior year in college. We played with wood bats in the NE-10 so I threw a lot of fastballs and tried to keep the ball low. I figured it I could minimize walks everything else would fall into place.

CK: In your 2013 senior debut, you retired the first 26 batters of the game just to see the final out to secure your perfect game be botched. I mean, that makes me squirm reading about it months after the fact. How did you possibly process that in the moment?

Massad: That game was crazy. It was pouring out and there were a lot of people that stayed to watch. There were two outs in the 9th and I still had the PG. There was a pop-up to the shortstop and the game would have been over. The team was already almost out of the dugout to come running out to the mound and the ball just hit off his glove and fell to the ground. I got the next guy out to keep the no-no but it was pretty tough to fall asleep that night. In the end of the day we won so that was really the only thing that mattered.

CK: After your 25th round selection you spent the remainder of 2013 out in the AZL. What was it like acclimating to the professionals?

Massad: The transition was pretty smooth. At first, throwing out of the bullpen was a little challenging. It is just a different mindset. I had less feel when I got out there sometimes but eventually I settled in.

CK: What was the coaching staff like out there in Papago?

Massad: The coaches were all great. They had a lot of insight that helped me throughout the summer. I learned the most from Bob Welch. I knew he had a very successful career and had a ton of knowledge on and off the field. We sat for hours in the bullpen together and he was very helpful.

CK: Do you have a preference towards starting or bullpen work going forward?

Massad: I would rather be a starter. I started in college so I think it comes a little more natural to me. In the end of the day it doesn’t really matter. I think I have more feel for my pitches as a starter.

CK: What pitches do you use? And which ones are you working on the most at the moment?

Massad: I throw a 4-seam fastball and a 2-seam/sinker along with a change-up and slider.  This year I really want to improve my velocity. I have been working hard this off-season to get stronger and improve mechanics so hopefully that will happen.

CK: Finally, what do you hope to accomplish as your first full professional season grows nearer?

Massad: My biggest goals of this upcoming season are to get outs and stay healthy.  Also I want to develop my pitches as much as possible. I feel there is always room for improvement. Hopefully all goes well and we can win some games this year no matter when and where I pitch.

Posted by Chris Kusiolek at 8:37 AM